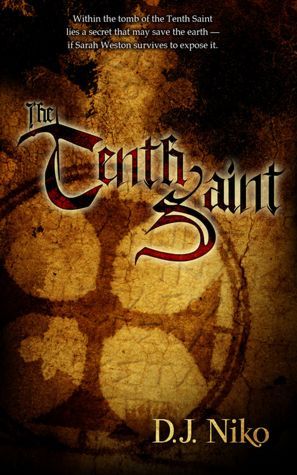 Sarah Weston is in the middle of the biggest dig of her career as an archaeologist in Ethiopia, when she is approached by a local claiming he has ‘rare artifacts’ to show her.

Sarah is skeptical, she knows that most locals are simply out to make a buck but the artifacts have all the authentic markers.

She asks the man to show her where he found the artifacts and what she discovers will change the direction of her exposition.

She finds a sealed tomb with inscriptions in an obscure dialect. When the director of the exposition hears that Sarah has basically gone on a wild goose chase, he sends in reinforcements–anthropologist Danial Madigan.

The tomb she discovered is rumored to be that of Tenth Saint of Coptic Christianity. Sarah and Daniel embark on a dangerous journey that will lead them through the dangerous caves of Ethiopia, through the deserts of the Near East, England, Paris, and Texas.

What do these cryptic, prophecy laden writings mean? Why does the body found in the tomb have modern dental filings when everything else about him dates to the 5th century? Could this really be the tomb of the Tenth Saint? And most importantly who is trying to kill Sarah and Daniel?

I actually started this series a little backward by reading the second book first but that didn’t spoil the series for me in the least! As I said before in my review of the second book, this is a thrilling ride through the Near East and its history!

The only way I can describe this series as a whole is that it’s a mixture of Lara Croft Tomb Rider,Indiana Jones, The Mummy, and The Davinci Code.

Since most of these are  film references, here are a few literary references that this series reminded me of– a modern day Amelia Peabody mystery that meets The Davinci Code.

It’s full of riddles and codes like The Davinci Code, and it’s got the archaeological mystery mixed with the occult that made both Indiana Jones and The Mummy so popular, plus the action and a bad ass heroine like Lara Croft Tomb Raider!

The only thing that was a little different in this book for me was the pace. I felt like the pace in the second book was much faster…this one was a little bit thick with the back story and there were a couple of parallel stories happening which bogged it down a bit.

In this book I found the ending and the second half of the novel a little convoluted. In the second book I felt like things were much more clear and concise. The conclusion and resolution were a little wanting for me.  I am actually kind of happy that I started with the second book first because the second book was a little more refined and polished than this one. Not that this isn’t a good book–it is–but I think it could use some  polishing and defining to make it truly sparkle.

As with the other book in the series, I loved Sarah’s character. She is spunky, tough, smart, daring, no nonsense, but not overly so that she would turn off some readers. I was able to sympathize with her and enjoyed watching her develop as a heroine.

Daniel was much more charming and dashing in the second book. In this one, I had a hard time buying the romance between the two. The chemistry in the second book made me believe there would be a lot more in this book but I was surprised to find there wasn’t much.

I realize this isn’t a romance novel, but I had hoped for a little more chemistry or sexual tension between them. It was like one minute they were colleagues that respected each other and then BOOM they were in love. I would have liked to have seen a little more development between the two.

I am amazed at Niko’s knowledge of so many different cultures! In both books, she has touched on so many rich cultures, history, religion, and mythology. She is able to articulate complicated history and present it in an understandable manner for her readers!

I love that she didn’t go with the safe archaeological content–Egypt–she went with Ethiopian archaeology which still has it’s roots in Christianity and thus familiar to most readers but this little shift away from the traditional setting made all the difference for me! I loved loved loved that about this novel and her other novel!

If you are looking for something new and exotic to sink your teeth into then this is the series for you. Suspense, archaeology, and history make this series one to watch and not to be missed!

Freedom cannot be labeled nor won nor envied. Only when one doesn’t realize what freedom is, is one truly free

Wednesday, December 4
Review & Giveaway at Peeking Between the Pages

Friday, December 6
Review at Oh, for the Hook of a Book

One thought on “Review: The Tenth Saint (The Sarah Weston Chronicles #1) by D.J. Niko”