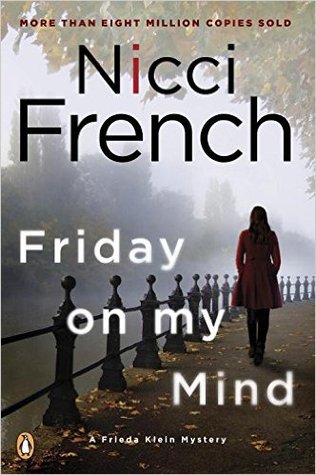 It’s just another day on the River Thames. Commuters are avoiding the Tube by taking the water ferry when a body catches the attention of the passengers.

The body is that of a man who has had his throat slashed and while he lacks any other identification, he is wearing a hospital ID tag that reads Dr F Klein.

The police quickly discover that Dr F Klein is actually a women, Dr Frieda Klein psychotherapist to be exact, and one who has helped the police in many investigations before this.

Dr Klein identifies the body as her former lover, Sandy. Dr Klein quickly becomes the prime suspect in his murder. Sensing that her arrest is imminent, Freida does the only thing she can……she runs.

Frieda knows the only way to prove that she is innocent is to find the murderer herself…..but when it’s proven that her prime suspect isn’t the murderer, she realizes she is playing a more dangerous game than she knows.

I haven’t had a chance to read a lot of mysteries that are more ‘modern’. Most of the mysteries I read are set in London in the 1800’s so when this one came up I thought I would give it a shot. I’ve seen the Frieda Klein mysteries on many of my friends TBR lists and thought they sounded interesting so I was totally on board with this one.

Even though I am starting the series on book #5, I didn’t feel like I was completely out of the loop in the series starting with book 5. The author did a great job at orientating the reader within the story and orientating them with the characters but I think it would have been helpful to start at the beginning of the series, it wasn’t completely necessary.

The mystery was complex and fast paced. I enjoyed the different twists and I loved the modern, more gritty feel to the mystery. I’m so used to reading period mysteries that I was refreshed by this more modern style of writing and how the mystery came together.

This book was much more than just a mystery….it was more of a thriller and much faster paced than I expected. And while it was refreshing and gritty, different, and new to me…..I struggled to connect to Frieda herself.

Throughout the book it’s clear that Frieda has kind of a ‘cult’ following among her friends. She was just ‘ok’ for me. I had a hard time connecting with her. At times I felt like she was too detached and cold and I could see why the police were suspicious of her. I would have been suspicious of her as well……I actually liked the lead DCI better than Freida in some ways.

I thought Freida’s circle of friends were eclectic and interesting mix of people…..I was curious to see how those friendships formed throughout the course of the previous books because the characters were so different and interesting and I just couldn’t figure out how all these people had come together. The book hinted at previous connections in other books so I was interested in reading earlier books to see how they evolved.

While I struggled with Frieda as a main character I thought the mystery/thriller was engaging and complex enough that I wanted to keep reading and was dying to see how it ended! I read the book fairly quickly and felt invested in the mystery.

2 thoughts on “Review: Friday on My Mind (Frieda Klein Mystery, #5) by Nicci French”