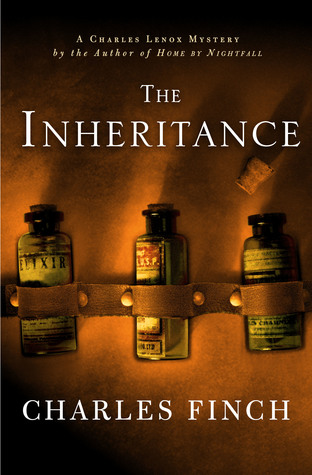 One of my favorite ‘armchair detectives’ is back…..though he’s less of an amateur and more of a professional than he was in the first books!

Charles Lenox receives a cryptic note from a former classmate, pleading for help and eludes to the fact that he might be in danger. Lenox and his friend Leigh agree to meet but when Leigh doesn’t turn up, Lenox begins to worry.

Fortunately Leigh is found alive but his lawyer is not……and it’s clear that Leigh is being stalked by a group of gangsters but what is unclear is the why? Leigh was lured back to London after many years abroad, with the promise of a substantial fortune…..by a mysterious benefactor.

Lenox and Leigh are no strangers to the ‘mysterious benefactor’ AKA the ‘MB’ as it’s a mystery they have tried to solve (rather unsuccessfully) since childhood.

Could the fortune and the MB be the reason why Leigh is being targeted? Or could it be his work in science that has upset someone to the point of murder?

Lenox begins to unravel his longest mystery yet….who was the MB and who would want Leigh dead?

The Charles Lenox series has been a fall fixture for me for quite some time. Some of the mysteries I liked better than others but this one was especially delightful. I loved being back in London, the last mystery was set in the country but there is something about London that works so much better for me in this series.

It’s been so fun watching Lenox evolve throughout the series. Now he’s more middle age and finally finding success in his profession. I admire his dedication and resolve. I liked that this book was more about Lenox and less about some of the other characters. Many of my favorite characters make appearances but for the most part the mystery is mostly Lenox.

This mystery kept me guessing right up until the end and I love how there was a secondary mystery being investigated that I am assuming will be a segway into the next book. In some ways I had hoped that that story line would have been more emphasized within the main story…..clearly the mystery that Dallington was working on was less important but I think it would have been nice to have Lenox’s and Dallington’s mysteries intersect in a different way than they were but overall I think it worked alright and look forward to seeing how that plot carries over into future books.

There were plenty of ‘red herrings’ in this mystery to keep the reader interested and wondering what game was a foot. I enjoyed seeing how things panned out for Leigh, he was a funny character and I enjoyed getting to know him throughout the story. He was so unique from the typical Victorian ‘gentlemen’ or ‘men of science’ and I really really liked his character over all. I also loved that we got to see Lenox as a young man…..his compassion toward Leigh made him all the more endearing.

Overall this book was another great installment to a long running series. As with all the Lenox books, I wonder what new adventures and mysteries await him. Though I do wonder what the end game is for Lenox…..being middle aged now what will his ultimate plan be? On one hand I feel like he has a lot more mysteries to solve but what will happen to the agency? Will Dallington and Polly run things with Lenox moving toward his home life and possibly migrating back to being more of an ‘armchair’ detective as he was in the early books? It sounds like that’s what Jane would like…..but will Charles want the same?