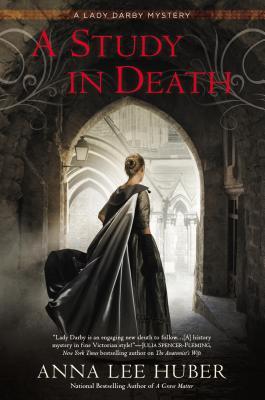 After reading the third Lady Darby book, I hoped this one would return to better investigations as the third book investigation left me feeling a little on the wanting side. While it was still a four star book for me, I simply felt like I needed more out of the next book. The relationship between Gage and Kiera saved the third book for me so I was hoping this one would improve the series.

I am happy to report that this book had a lot more mystery and it was a bit darker which I liked. It reminded me of the earlier mystery that Gage and Kiera worked on so in that regard I was much more invested in the whodunit element of the story.

Scotland, 1831. After a tumultuous courtship complicated by three deadly inquiries, Lady Kiera Darby is thrilled to have found both an investigative partner and a fiancé in Sebastian Gage. But with her well-meaning—and very pregnant—sister planning on making their wedding the event of the season, Kiera could use a respite from the impending madness.

Commissioned to paint the portrait of Lady Drummond, Kiera is saddened when she recognizes the pain in the baroness’s eyes. Lord Drummond is a brute, and his brusque treatment of his wife forces Kiera to think of the torment caused by her own late husband.

Kiera isn’t sure how to help, but when she finds Lady Drummond prostrate on the floor, things take a fatal turn. The physician called to the house and Lord Drummond appear satisfied to rule her death natural, but Kiera is convinced that poison is the real culprit.

Now, armed only with her knowledge of the macabre and her convictions, Kiera intends to discover the truth behind the baroness’s death—no matter what, or who, stands in her way…(summary from Goodreads).

So while I was completely invested in the mystery element of this book, the romance part stalled for me. I didn’t feel like Kiera and Gage were really progressing in their relationship in the way that I had seen in the previous books. I don’t know if it was the introduction of Lord Gage or if it was the illness her sister was experiencing but I felt like outside sources were interfering in their relationship a lot in this book and for some reason or other, it just stalled the progress.

While that’s to be expected I guess to a certain degree, I also felt like the big Greece reveal was too rushed and didn’t satisfy me as a reader. There was such a focus on it for the last two books that I felt sure it would be something bigger than what it was. For me this was the biggest problem between Gage and Kiera in the book. I felt like the audience just needed more. More explanation and more time to process what Gage had been through.

While the romance was a little off in this book for me, I felt like the mystery was better constructed than in the last book. However that said, this book didn’t have quite the red herrings that the first book had. I expected a little more in the twists department as I had come to expect from earlier books.

On the whole though, while this wasn’t my favorite book in the series, it was still entertaining and fun to read. I love Kiera and Gage and their methods of investigation in addition to their wit and charm and volatile romance. I think this is a solid series and while not every mystery will compare to the first book, it’s still a wonderful read and a fun romp through Scotland!

One thought on “Review: A Study in Death (Lady Darby Mystery #4) by Anna Lee Huber”