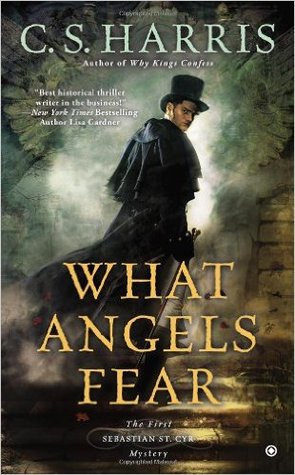 Later this week I have another book in this series up for review. Having not read this series before, I felt like it might be a good thing to start with the first book to at least get my barrings. The book I am reviewing is the 12th book, so obviously there is a lot I will have missed, but I wanted to at least get to know the back story of the protagonist, Lord Devlin.

It’s 1811, and the threat of revolution haunts the upper classes of King George III’s England. Then a beautiful young woman is found raped and savagely murdered on the altar steps of an ancient church near Westminster Abbey.

A dueling pistol discovered at the scene and the damning testimony of a witness both point to one man, Sebastian St. Cyr, Viscount Devlin, a brilliant young nobleman shattered by his experience in the Napoleonic Wars.

Now a fugitive running for his life, Sebastian calls upon his skill as an agent during the war to catch the killer and prove his own innocence. In the process, he accumulates a band of unlikely allies, including the enigmatic beauty Kat Boleyn, who broke Sebastian’s heart years ago.

In Sebastian’s world of intrigue and espionage, nothing is as it seems, yet the truth may hold the key to the future of the British monarchy, as well as to Sebastian’s own salvation (summary from Goodreads).

Going in to this book, I had been reading a lot of cozy mysteries, most of which were set in London or at the very least, in Britain. So looking at this one, it looked much different and I was right. I was hoping it would be a little more edgy and gritty, and I wasn’t disappointed.

Lord Devlin was a very interesting character. He wasn’t the typical squeaky clean armchair detective that many ‘lords’ play in Victorian or Regency mysteries. He’s got this kind of ‘devil may care’ attitude and is suffering from a little PTSD from his time in the Napoleonic wars. I love that he is kind of this damaged, dark, brooding character. Naturally, I find this sexy because he is so mysterious. We don’t really get to know ‘him’ as in individual too quickly, it’s more like an introduction but yet you know there is a smoldering story buried within that is dying to come out.

I really liked the setting too. It wasn’t the posh upper-crust of Victorian or Regency society necessarily….sure the characters were blue bloods, but the ton was more dark and sinister. There was this whole undercurrent of grittiness that I just loved because it created so much atmosphere.  It had a delicate balance of upper class mixed with the underbelly of London and I LOVED it! It was a much darker mystery series and made me feel like I was reading more of a thriller than just a simple murder mystery.

The only thing that I think I would change would be the sexual tension between Devlin and his love interest, Kat. I didn’t buy that he had this kind of unresolved desire for her beyond what he told us as readers. Nor did I completely buy that Kat was that drawn to him either. I agree that they had a complicated past with unresolved issues but I just didn’t completely buy the sexual tension between them. I am wondering how their relationship evolves through the series.

I thought the plot was well structured in addition to the atmosphere. There were enough red herrings and twists to keep me interested and I loved how the chapters were short and crisp. That made for fast reading and kept me eager to read the next chapter. I am thrilled that I decided to start this series. So many times it’s a female detective and this time it was a man….and a complicated man to say the least. I love his approach to solving the crime and the crime itself was horrifying but yet intriguing. I have a lot of positive things to say about this series and am looking forward to reading more from this author in the future!