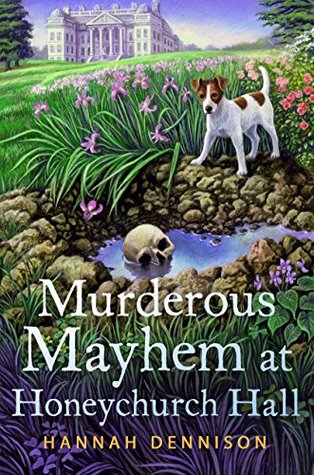 Not going to lie, there is something about a cute little dog on the cover of a book that just makes me want to read it all the more!

When this book came across my desk for review, I was knee deep in cozy mysteries (Lady Darby series) and was totally on a cozy kick. So when I saw this cozy with an adorable little terrier on the cover, I was 100% sold!

Typically I hate starting a series in the middle, however I just couldn’t pass this one up….I’m a sucker for animal cozies!

When the only copy of Ravished, Iris Stanford’s new manuscript, never arrives at her London publisher’s office, her daughter Kat investigates the tiny local village post office, where it appears the package never left the building.

Iris is on tenterhooks—not only is her novel gone with the wind, but she’s deathly afraid that Muriel Jarvis, the postmistress and notorious busybody, will expose her secret identity as the bestselling romance writer Krystalle Storm.

Meanwhile, Muriel has her own problems with the sudden death of her husband Fred, which has left her heavily in debt. In the spine-tingling climax, both past and present collide as Kat fights for her life and those she holds most dear, dancing once again with the dark forces lurking behind the grandeur of Honeychurch Hall (summary from Goodreads).

So, my first thought is….yes this can be read as a standalone, but I think I would have liked it more had I read at least one of the other books. Everyone and the setting was completely new to me and sometimes I found myself feeling like a bit of an outsider. I didn’t fully appreciate the relationships between the characters and sometimes I just felt like I wish I had some of the backstory so I could better understand the dynamics.

What I did like was the small town–quaint–feel and all the charm that comes with an English country town. While the ‘Skirmish’ that was so predominantly featured in the story, was really just something for the characters to talk about, I found it to be a fun little bit of charm that made me feel at home in the village. For me, I loved the simple, daily life of the British and while some might argue that it’s ‘been done’ I would say that Dennison makes it feel fresh! I feel like I could live there and be forever happy with it’s familiarity and charm!

The characters themselves are stereotypical but I found that to be perfectly fine. They were recognizable characters and archetypes and I found that refreshing and familiar. Personally, I loved Kat. She was smart and has an inquisitive mind which is obviously necessary for an amateur detective but it’s her presentation that I liked. She was relate-able and I could see myself being her friend if I lived in the village.

While I really liked this book, I gave it a 3.5 star rating. It was good and I would likely read the other books in the series….but the problem for me was that I hadn’t read the other books in the series. As I said before, it could read as a standalone but I just felt like I was missing out on the greater story and I couldn’t give it more than a 3.5 star rating. Personally I would recommend reading the first book at the very least so that you can get your barrings. There were also lulls in the story where there was a lot of explanation about family history etc and that was a little much for me and bogged down the story in my opinion.

I would recommend this book for fans of books like the Aunt Dimity series or Sneaky Pie Brown or other series that focus more on daily village life with a dash of murder thrown in. It was a good read and a nice escape!