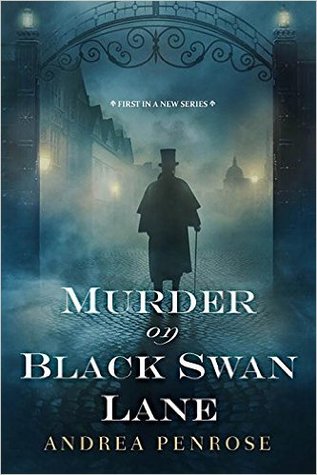 While combing through the catalog of titles on Netgalley, I happened to come across this one and admittedly, was captivated by the cover. I am not really sure why, I mean it’s not like it’s really that new and eye catching….I feel like I’ve seen a ton of books with similar titles that I was passed by in favor of something more eye catching.

But for some reason I paused on this one long enough to read the summary. Again, nothing terribly fresh but yet it sounded like just the thing I was looking for…..something predictable. I was dying to read another British detective mystery novel and this sounded like just that. So I clicked on request and once it was approved, I started in on what I expected to be a run of the mill detective novel.

The Earl of Wrexford possesses a brilliant scientific mind, but boredom and pride lead him to reckless behavior. He does not suffer fools gladly. So when pompous, pious Reverend Josiah Holworthy publicly condemns him for debauchery, Wrexford unsheathes his rapier-sharp wit and strikes back.

As their war of words escalates, London’s most popular satirical cartoonist, A.J. Quill, skewers them both. But then the clergyman is found slain in a church—his face burned by chemicals, his throat slashed ear to ear—and Wrexford finds himself the chief suspect (summary from Goodreads).

So the plot sounds like something you have read before am I right? Rogue-ish lord with a flair for unconventional hobbies gets framed for murder, meets quirky side kick and/or love interest and together they solve the crime. Was this book that? Yes. But yet I felt like I was reading something new and different at the same time.

For me what made this book was the characters. Wrexford is into chemistry and basically marches to the beat of his own drum. He’s smart and has a ‘devil may care’ attitude about the ton and society. He is familiar with the satirical drawings of A.J. Quill as many of the drawings are of him. What he doesn’t expect to learn is that A.J. Quill is in fact Charlotte Sloane.

Charlotte is kind of this mysterious woman. She lives in a working class section of London and is a widow. She takes care of two orphan children and basically educates them which means she herself is educated. She has upper class friends but doesn’t move in high society or even middle class circles.

When Wrexford meets her he is surprised to find first Quill is a female, and secondly that she is so educated. He knows she must have a backstory but we don’t find that out what that story might be. I love watching them play off each other. Neither one is all “I love you and want to throw caution to the wind to be together” but there is an unmistakable sexual tension slowly burning below the surface. Romance isn’t the obvious focus of the story but there is a hint of something that might develop in future novels.

I loved that Charlotte was kind of obscure. Wrexford was a very open character. He basically doesn’t care what people think of him and the audience feels like they know him from the beginning whereas Charlotte has more hidden facets. She isn’t as open about herself and when we read her perspective the audience gets the sense that we don’t have the full story which makes her intriguing. I also love that Wrexford doesn’t try to control her and keep her ‘safe’. In many detective novels there is the overwhelming sense of protection from the male lead and it often borders on irritating. I love that Wrexford respected her enough and understood that she wouldn’t be placated by staying at home while he did all the foot work.

The mystery itself had a lot of interesting elements and I loved the science aspect. There were enough twists and turns to keep me interested in the story but ultimately it was the relationship between Wrexford and Charlotte that kept me reading. Though mismatched, I think they make a great pair and I look forward to seeing how they evolve in future books. I was way more into this book than I expected to be, so much so, that I downloaded another book by Penrose because I loved her story telling style.

3 thoughts on “Review: Murder on Black Swan Lane (A Wrexford and Sloane Mystery #1) by Andrea Penrose”