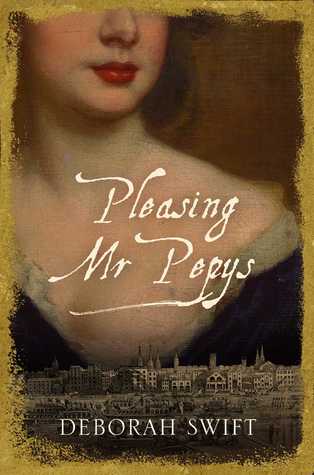 I’ve been fortunate enough to read a few of Deborah Swift’s books, though not as often as I would like because when they are released I am almost always in the middle of another book and then by the time I am done I’ve forgotten about her latest release.

Luckily, I had some time for reviews in early Oct which coordinated with the book tour for Pleasing Mr Pepys hosted by Historical Fiction Virtual Book Tours. So naturally I had to hop on this one!

From acclaimed historical novelist Deborah Swift, Pleasing Mr Pepys is the story of Deb Willet, Samuel Pepys’s servant, told from a fresh perspective.  Well-educated but, due to circumstances beyond her control, not quite respectable, Deb Willet is desperate to escape her domineering aunt and takes a position as companion to Elisabeth Pepys, Samuel’s wife.

Deb believes it will give her the respectability it craves – but it proves far more complicated than she could ever have imagined. London during the 1660s is a time of turmoil. Although Charles II has been restored to the throne, there is the prospect of war with the Dutch – the world’s great power of the era. In the midst of this tumult strides Samuel Pepys – diarist and man of note.

Pepys’ influence in Restoration London means that the Dutch are keen to get their hands on his secrets – even if that means murder, espionage and blackmail to get them… Deb is soon caught up in the middle of a dangerous game – while at the same time trying to counter Mr Pepys’s lust for her (summary from Goodreads).

Personally, I am not a huge fan of historical fiction set in the 1600s. It’s just not my era but I try not to say no to reviews of books set in that time simply based on my personal preferences. Swift tends to favor that period and I have been a fan of the books she’s written. They are always, historically well researched and this latest book met the same expectation.

I literally knew nothing about Samuel Pepys. I had no idea who he was or why he was historically important nor did I frankly care. When I started the novel, I basically had no historical premise for the main character but I quickly found myself wanting to know more about him. Everyone knows who the big name Kings and Queens are with a few Prime Ministers, but rarely are figures such as Samuel Pepys.

I think that Swift was conscious of that fact and helped familiarize her audience accordingly. I was curious enough about the characters to do research on my own, but if I hadn’t been so inclined then Swift did an excellent job at providing information to readers so that they had enough historical reference to appreciate the characters.

This novel is based on a real life person about whom not much is known–Deb Willet. Not much is known about Deb besides what Pepys writes in his diary. But in this book we get a fictionalized account of her life but yet it is rooted in fact.

I loved the love story between the two main characters and there was plenty of espionage and intrigue to move the story along at a fast pace. I found Pepys to be a charming, romantic interest but he had quirks and flaws just like any other man, but yet I found him irresistible, flaws and all.

If you are looking for a book that’s a little off the beaten path and isn’t about a historical figure who is perpetually written about, then consider picking up this novel. Swift’s historical research is marvelous and the quality of her writing is top shelf!

I will say though, the cover isn’t doing anything for me. It’s band and has nothing to distinguish itself. Swift’s covers are typically well designed and eye catching so I was surprised to see it so poorly executed. Others might like it but for me it left me wanting.

Be sure to check out the other stops on the tour hosted by Historical Fiction Virtual Book Tours for chanced to win a copy of the book, author interviews, and other reviews!

Thursday, September 28
Review at The Maiden’s Court
Guest Post at Books of All Kinds

Friday, September 29
Guest Post at Let Them Read Books
Spotlight at What Is That Book About

Monday, October 2
Review at History From a Woman’s Perspective

Friday, October 6
Feature at Passages to the Past

Monday, October 16
Review at Just One More Chapter
Review at Encouraging Words from the Tea Queen

Friday, October 20
Review at A Literary Vacation
Guest Post at The Writing Desk

One thought on “Review: Pleasing Mr Pepys by Deborah Swift”