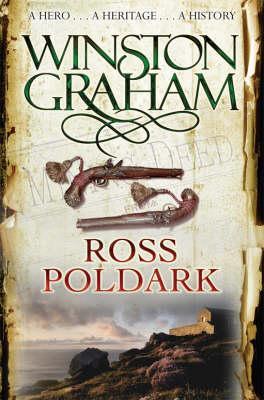 Sometimes you just have years where the books that you read surprise you–in good ways and in bad. This has been the year that I decided to make a huge effort to read books on my TBR list that continue to haunt me and wreak havoc on my reading schedule.

Meaning, I always get the urge to read one of these books when I have a billion other books to read on my review schedule. So I built in time to try and get to those reads. One such book was Ross Poldark. I’ve not watched the show but I hear such fantastic things about the show and the books that I had to pick up a copy of this book to read.

It was one of those that had been on my radar forever and suddenly the mood struck and I knew I simply had to read it.

In the first novel in Winston Graham’s hit series, a weary Ross Poldark returns to England from war, looking forward to a joyful homecoming with his beloved Elizabeth. But instead he discovers his father has died, his home is overrun by livestock and drunken servants, and Elizabeth—believing Ross to be dead—is now engaged to his cousin. Ross has no choice but to start his life anew.

Thus begins the Poldark series, a heartwarming, gripping saga set in the windswept landscape of Cornwall. With an unforgettable cast of characters that spans loves, lives, and generations, this extraordinary masterwork from Winston Graham is a story you will never forget (summary from Goodreads).

This book has mega high ratings on Goodreads. Tons of my friends have read it an raved about it. A family saga that not only looks sexy on the cover but on the screen as well. So imagine my shock when I was 30% in and snoozing.

I was wholly uninterested in ANYTHING that was happening in this book. Ross was boring and bland to me. Elizabeth seemed weak and Francis was nondescript, and the cast of supporting characters were unmemorable at best. I could care less for the mining parts and the lengthy descriptions of the mining business and estate. However it wasn’t any of these that bothered me the most…..

I was completely lost in the prose. I felt like the author would flit between characters and stories without warning or transition. I became frustrated and confused by what was happening. It read choppy to me. I didn’t care for how things transitioned and it took way too long to get to the point of various scenes.

I realize this series was first published in the 1940s so the prose and style could be a reflection of the period, but I simply felt uncomfortable with how everything was unfolding. From one minute to the next there would be multiple things happening in one scene and the author just didn’t give enough warning for the reader to track in my opinion.

There was an element of desperation in my attempt to love this book. I desperately wanted to love it. By all accounts, it should have been right up my alley with things to love. I see the Poldark TV show previews and I want nothing more than to read this book but I just couldn’t take another night of sitting anxiously, reading line after line of too much mining and too many shifts in the narrative. At some point I just had to call it and say that I gave it my best shot. As much as I would love to read it through until the end and give it a complete review based on my experience with the entire story, I just couldn’t. I couldn’t make myself read a single chapter more.

I needed so much more from this book in order to keep reading. I could have accepted the bland mining details. I could even accept some of the boorish characters, but I couldn’t accept trying to navigate the story. I felt like I gave this book my best attempt and read to almost half way. I had to stop after a hundred pages because, if it was going to get better, than it should have. A really good romance or chemistry between the characters would have helped. Maybe it was a slow burn romance that would eventually unfold but I wasn’t invested enough in the story to continue reading.

It’s with a heavy heart that I had to put this one down. Who knows maybe some day the mood will strike again and I will give it a second chance but as of right now…..no. Maybe I will watch the show first and see if it suggests a better story in the books for those who continue reading…..if so then I might pick this up again, but for now its my second DNF.

Come by the blog today and check out this amazing book by @kristywharvey it’s so great and her books always get me in the mood for spring reads!
It's Sunday and I have this fun little stack of Bridgerton books for #stacksunday I am missing Bridgerton and can't wait for season 2! Have you read the books yet? Which one is your favorite? ⁠⁠
What was the last book you bought thanks to the Gram? I saw this book and loved the cover and it sounded so cute! I cannot wait to read it! Who here has read this one? ⁠⁠
I am missing Game of Thrones so much and longing for Winds of Winter even more! Every year I am like 'this has to be the year we get Winds!' and then it never is! Sigh....maybe next year! ⁠⁠