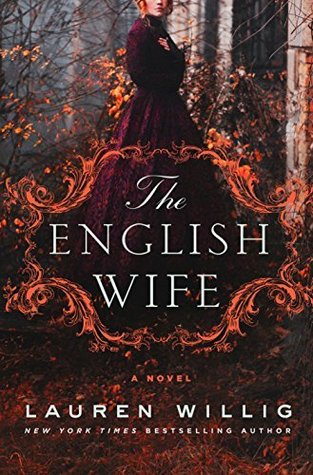 That was until this stunning cover screamed READ ME! Just looking at this book promised something fantastic, especially for fall. I needed this book more than I knew and I was reminded exactly why I love Lauren Willig and why I need to get back to the Pink Carnation series!

Annabelle and Bayard Van Duyvil live a charmed life: he’s the scion of an old Knickerbocker family, she grew up in a Tudor manor in England, they had a whirlwind romance in London, they have three year old twins on whom they dote, and he’s recreated her family home on the banks of the Hudson and renamed it Illyria.

Yes, there are rumors that she’s having an affair with the architect, but rumors are rumors and people will gossip. But then Bayard is found dead with a knife in his chest on the night of their Twelfth Night Ball, Annabelle goes missing, presumed drowned, and the papers go mad.

Admittedly, the prologue started off a little blah, until the last paragraph. I put it down and tried to go read something else but I kept going back to this book. That final paragraph of the prologue hooked me and I just needed to read the book already. So I abandoned the book I was going to read, in favor of this one.

I was immediately sucked into a story about the rich and famous, family secrets, the promise of love, and of course murder. This book felt a little like Rebecca or some other gothic romance novel in the vein of Victoria Holt.

There was something decidedly uneasy about the story from the get go. Clearly there were lies and family secrets that were probably best left unsaid and there was a sense of unease as some of the characters weren’t what they seemed….literally.

I loved discovering this book. The character development was outstanding. I loved watching Janie slowly come in to her own and stand up to her mother. I also loved watching how Bay and Annabelle’s marriage changed and evolved. The secondary characters were equally scandalous and intriguing.

This book had so much to recommend itself. Romance, murder, family secrets…..everything that make it the perfect fall read. I found myself reading late into the night and not anticipating all the little twists and turns in the story. I was so hooked by about 30% through and I found annoyed when I had to put it down for something as trivial as sleep!

Willig’s writing is witty, charming, and captivating. I loved this book on so many levels and just reading her words made me remember why I love her novels. I left off on the Pink Carnation series after the 5th book because I felt a little underwhelmed but now that I have read this I am inspired to continue the series and possibly her other stand alone books.

While this book was an easy 5 star for me, it wasn’t without it’s little flaws. Without giving too much away, I found that Annabelle’s plot rather unfinished and a big question mark. The last few chapters just left the audience hanging and I felt a little disappointed in that. I also didn’t like that Giles kind of became this ‘hero’ of sorts when so much had been put into casting him as the villain.

As I said, this was the perfect fall read for me. Even though it’s not coming out until January 2018, you need to go pre order this book. You won’t be sorry! It was captivating and alluring, calling my name from my nightstand all hours of the day and night. Pre order it now….you’re welcome!

2 thoughts on “Review: The English Wife by Lauren Willig”