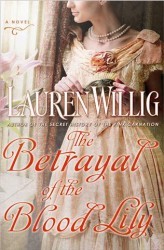 I love the series as a whole but the last book in the series that I read, just left me a little wanting in the uniqueness category.

So I abandoned it in favor of other books, though I always knew that someday I would come back to it because lets face it, I am in love with this series, but I needed  little time to step away from it and come back to it in order to love it.

Whisked away to nineteenth-century India, Penelope Deveraux plunges into the court intrigues of the Nizam of Hyderabad, where no one is quite what they seem.

New to this strange and exotic country- where a dangerous spy called the Marigold leaves venomous cobras as his calling card- she can trust only one man: Captain Alex Reid.

With danger looming from local warlords, treacherous court officials, and French spies, Alex and Penelope may be all that stand in the way of a plot designed to rock the very foundations of the British Empire (summary from Goodreads).

As I’ve mentioned before in my other reviews of the series, Willig has a kind of ‘formula’ that she uses in her Pink Carnation series…..strong aristocratic lady meets stubborn dashing bachelor in tights and they blunder through espionage 101 and ultimately end up having a HEA. While it’s formulaic, it doesn’t ring false for Willig because she always comes up with memorable and unique characters.

I never liked Penelope in the other books. She was kind of the resident ‘skank’. She was reckless and impulsive and I just wasn’t really into her, however I was interested to see how her ‘romance’ was going to play out in this book. Could Willig convince me that she was able to find true love based on what I had seen of her in the other books?

The short answer is yes.

I loved how Willig took the classic romance troupe and kind of made an anti romance of sorts. When we meet Penelope she is married to Freddy whose she was forced into a marriage with back in the fifth book I believe.

Freddy is positively useless and a complete jack ass. In the fifth book, Charlotte had said that maybe the marriage and removal to India would be the making of their marriage, so I thought that this book would be about them coming together but it was far from that. I literally couldn’t stand Freddy by the end of the first chapter. He was irritating, useless, and puffed up well above his station. I felt so bad for Penelope but at the same time, I wasn’t completely sorry for her.

Then we have Captain Alex Reid. Straight laced and noble. A man who can hardly stand the sight of Freddy. It became rather apparent that Penelope had designs on Alex but as a noble officer, he was inclined to pass on that situation. However against his better judgement, he finds himself being won over by Penelope.

I agree with Collin’s great aunt’s opinion of Penelope’s story…..it’s the most tragic. Penelope is so impulsive and self destructive at times that is boarders on disastrous. I loved how that played out in the developing romance between Alex and Penelope. It made for a completely different approach to romance than in some of the other Pink Carnation books. In this book, Penelope is very married and Alex is almost too noble when it comes to respecting women. Slowly I was just as won over as Alex and I appreciated the unique trope in this book. I didn’t find the adultery aspect distasteful at all, though others might not agree.

The only thing that I thought distracted from this novel was the Indian history. All the other Pink Carnation books are set in England. The last book’s hero was from India but it was still set in England so the landscape and politics were familiar. In this book that is not the case. I had a hard time following or appreciating the politics in India and basically the entire setting didn’t do a whole lot for me. It should have been this exotic and unique land but I felt like the setting was under utilized. I was more interested in the romance than anything else and as far as I can tell it was only set here to set up future books and characters. In my opinion, this could have been set in England as well but I guess if Willig wanted to give readers a break from the Western politics then India seemed like the next logical setting.

Over all this was a good book and I was reading well into the night. Even if I didn’t think it was as good as some of the others in the series, I still enjoyed it enough to start the next book immediately after closing the cover on this one.

Book: The Betrayal of the Blood Lily (Pink Carnation #6) by Lauren Willig

3 thoughts on “Review: The Betrayal of the Blood Lily (Pink Carnation #6) by Lauren Willig”