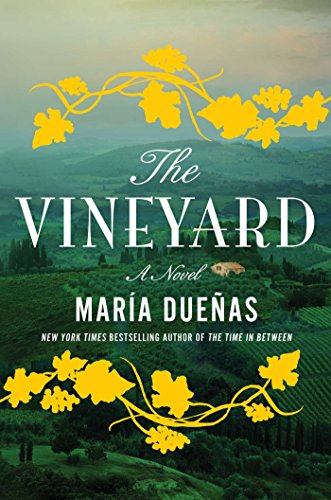 Maria Duenas is not a familiar author to me at all. I’ve seen her most well known novel The Time in Between, come up on my recommended reading list more time that I can remember, but I just never think to give her books a second look.

I think mostly because her books seem to be more about culture and heaving than something I would normally read, however when her latest book THE VINEYARD came up for review, I loved the cover and the description sounded like it would be right up my alley.

It’s been compared to authors such as Kate Morton and Kristin Hannah which are big names so I thought, why not? It would be something different if nothing else.

Mauro Larrea sees the fortune that he had built after years of hardship and toil come crashing down on the heels of a calamitous event. Swamped by debts and uncertainty, he gambles the last of his last money in a daring move that offers him the opportunity to resuscitate his fortune. But when the unsettling Soledad Montalvo, wife of a London wine merchant, comes into his life, her passionate intensity lures him toward an unanticipated future.

The Vineyard spans diverse worlds, from the young Mexican republic to magnificent colonial Havana; from the West Indies to the Jerez of the second half of the nineteenth-century, when its wine trade with England turned the Andalusian city into a legendary cosmopolitan enclave. A novel replete with glories and defeats, with silver mines, family intrigues, vineyards, and splendid places whose grandeur has faded in time, The Vineyardis a story of resilience in the face of adversity, of a lifeline forever altered by the force of passion (summary from Goodreads).

This book was a little outside my comfort zone in terms of location. Normally I tend to read books set in Europe or Russia, because that’s where my interests are historically. While this book was set in a number of areas such as Mexico and Cuba, it had hints of European roots which helped make me enjoy it. Though I will say that at times I felt like there was a little too much going on in terms of location. I think it might have been easier to digest if there had been more of a focus on one region rather than trying to incorporate so much.

I loved Duenas’s lyrical hand at descriptions and her whimsy with the storylines and plots. Her details are vivid and vibrating with richness. In that sense I felt like she did a marvelous job and I can see why she has been compared to Kate Morton and Kristin Hannah.

I also enjoyed how she explored the national identity of the characters. That was something unique to this book and I appreciated how well she illustrated the Mexican people and heritage in a way that was so much more than something simple. She went to great effort to showcase the people as they were rather than what was imagined. Well done!

This book was a 4 star for me, I liked the story and the characters but at times I felt like the movement of locations was just too much and overwhelming. I appreciated the effort but I was much more wrapped up in the characters than the locations.

Book: The Vineyard by Maria Duenas