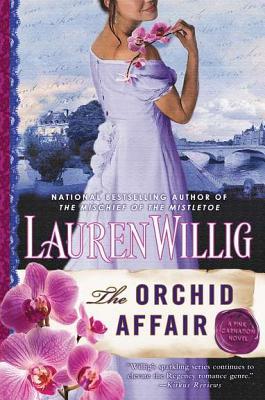 After diving back into the Pink Carnation series with the sixth book, The Betrayal of the Blood Lily, I was eagerly ready to continue reading.

I have already read the seventh book so I moved on to The Orchid Affair instead. As with the previous books we meet a likable heroine in a decidedly awkward situation and a headstrong bachelor with the last thing on his mind being love.

While many of Willig’s books have a decidedly obvious formula, that has never turned me off to the series. I think what I love most is her ability to make me buy into the romance no matter how odd or challenging it is.

Veteran governess Laura Grey joins the Selwick Spy School expecting to find elaborate disguises and thrilling adventures in service to the spy known as the Pink Carnation. She hardly expects her first assignment to be serving as governess for the children of André Jaouen, right-hand man to Bonaparte’s minister of police.

At first the job is as lively as Latin, but Laura begins to notice Jaouen’s increasingly strange behavior. As Laura edges closer to her employer, she is surprised to learn that she has much in common with him. And Jaouen finds he’s hired more than he’s bargained for (summary from Goodreads).

About the only way I can describe this book is the Von Trapp family without Nazi’s and singing. I am not really sure why but it just seemed like that was the best way to describe it. Governess goes to work for man who is supposed to be the ‘enemy’ and has children to ‘win over’ only to find that he isn’t as brutish as he seems and the children in desperate need of a female influence. With the threat of the French master of terror, Gaston Delaroche, stalking their every move it becomes rapidly apparent that the family needs to get out of Paris. So for me there were hints of The Sound of Music throughout the story.

I thought this was going to be a more difficult romance for me to buy into, mostly because the other romances has more of less been between the gentry or lords/ladies. It’s implied that Andre Jaouen is more of a wealthy gentleman in Paris, especially because he has a governess.

Where as Laura is clearly what she seems….a poor governess eager for adventure but lacking funds or options. I figured that would be a challenge for me to believe however, Willig as usual does a fantastic job at weaving a believable story between the hero and heroine. I loved watching their romance evolve and come to fruition. There were times that I felt like maybe it was a little too rushed but the speed seemed more about circumstance than about realism.

Moving there series back to its roots pleased me. While I liked the dog leg into India and some of it’s politics, the series started as more of a Paris/England situation so I liked that we were getting back to its roots so to speak. I also enjoyed returning characters like Miss Gwen and Jane. I also appreciated how Willig kind of gave us a little ‘ever after’ in this book. Sometimes it isn’t clear what happened to some of our favorite couples but in this one she kind of fills in the gaps toward the end with Eloise’s research.

I want to talk a little about my ratings for some of the books in the series. While I might give 3 stars to a book in this series, it by NO MEANS indicates that it’s a subpar book. Every book in the Pink Carnation series is wonderfully addicting for me. I literally start one and the next thing I know it’s 2 am and I am still reading. I love love love these books. They are everything that is promised….the modern Jane Austen. I love them. However, when compared to the first book in the series, it’s hard to compare. I tend to base my ratings of the books as they compare to the first book. This one was a 3.5 for me, but as I said that doesn’t mean it’s a ‘mean’ book, because it was anything but that, it just means that compared to the first book it was good rather than outstanding (as was the first book).