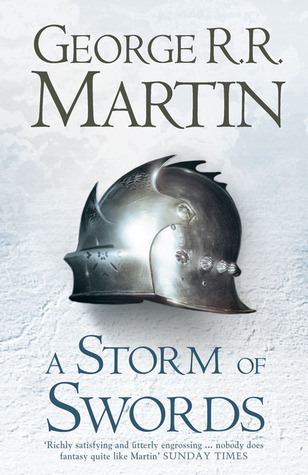 Over the last couple of years, I have started re-reading the ASOIAF series. The first time I read all the books, I felt completely rushed and didn’t have a complete scope of everything that was happening.

And let’s be real….there is SO much going on in this series. So many layers of betrayals, history, lore, and the complexity of the characters and houses alone warrants at least a few re-readings.

This time through, I promised myself that I would savor each book and not feel rushed or like I was on a timeline to read each one.

This book is my absolute favorite in the series so I was happy to slow it down and leisurely read it rather than rushing to devour each chapter. And leisurely read I did. I started in back in Aug and didn’t finish until Nov. Granted I had a lot of other books on my review calendar and I got waylaid with the Pink Carnation series, but I finished this book all the same.

Of the five contenders for power, one is dead, another in disfavor, and still the wars rage as violently as ever, as alliances are made and broken. Joffrey, of House Lannister, sits on the Iron Throne, the uneasy ruler of the land of the Seven Kingdoms.

His most bitter rival, Lord Stannis, stands defeated and disgraced, the victim of the jealous sorceress who holds him in her evil thrall. But young Robb, of House Stark, still rules the North from the fortress of Riverrun. Robb plots against his despised Lannister enemies, even as they hold his sister hostage at King’s Landing, the seat of the Iron Throne. Meanwhile, making her way across a blood-drenched continent is the exiled queen, Daenerys, mistress of the only three dragons still left in the world. . . .

But as opposing forces maneuver for the final titanic showdown, an army of barbaric wildlings arrives from the outermost line of civilization. In their vanguard is a horde of mythical Others—a supernatural army of the living dead whose animated corpses are unstoppable. As the future of the land hangs in the balance, no one will rest until the Seven Kingdoms have exploded in a veritable storm of swords (summary from Goodreads).

So forewarning, this post contains spoilers. If you have been living under a rock for the better part of eight years and haven’t at least watched Game of Thrones, then I recommend you stop reading this post now. The show follows the book for the most part but if you haven’t watched the show and you haven’t read the books then stop reading this review and go start immediately!

Now that that is out of the way, let”s get down to business. I had forgotten how much actually happens in this book. I literally feel like I was on a rollercoaster of emotion because so so so much happens in this book. The Red Wedding. Jamie’s hand. Joffrey’s wedding. Tyrion’s trial. Lord Tywin’s death. Sansa being absconded. Arya fleeing to Bravos. Jon Snow being elected Lord Commander. Lord Mormont’s murder. The sack of Astapor and Mereen. The introduction of Lady Stoneheart. I mean there is so much happening in this book that is critical to the larger narrative that it can actually be overwhelming.

One of the things that I remember loving about this book was the perspective of Jamie. In the previous two books, he was anything but sympathetic but in this book, Martin challenges us to put ourselves in his shoes. In spite of throwing a child out of the window in book one, I can’t help but feel sorry for him and his miserable life. Was much of it his own making….yes however in spite of everything I feel sympathy for his character and hope for better things to come in the future.

When I read the book the first time, the shows hadn’t caught up to it, so I was reading everything for the first time when I read this book. At that time, the Red Wedding was like ‘wow the Frey’s suck’ and ‘damn poor Robb Stark’ but there wasn’t the same sense of betrayal that I felt when I saw it on TV and when I read it this time through. There was something about seeing the Red Wedding on the screen that made this scene so much more gruesome. When I saw it on TV yes, I knew it was coming because I had read this book…..but I wasn’t prepared for how much emotional impact it would have on me actually seeing it. While reading this book again, I found the Red Wedding so much more emotionally grueling and gut wrenching. I think because I could see it coming this time through so much more visceral than before. I literally had my stomach in knots reading it this time. I was so sad for days after….it was so much more impactful this time mostly because I knew what was coming and could appreciate the tedious ground work and build up early on in this book. I also felt like Robb and Catelyn should have seen it coming long before it actually happened. Rose Bolton took a Frey wife, they should have known something was up.

I think one of the things that I got out of this book this time around, was the curiosity to learn more about Ashara Dayne and the whole Dayne family. Ashara and Ned Stark are rumored to have fallen in love when they met at a tourney at Harrenhal. This meeting and history is mentioned in the other two books as well but something really struck me about their family in this book for some reason. I (like so many others) and dying to read prequels on Robert’s Rebellion but now I actually want to read more about Ashara Dayne and her brother Set Arthur Dayne, The Sword of the Morning. Something about them screams importance to the over all narrative or at least the history. I would love to know more about her and Ned Starks supposed romance. Ned Stark killed Ser Arthur at the Tower of Joy as many know, but I feel like there was more to it than that. More to the Dayne family and not just how they relate to the Starks or Jon Snow but something independently interesting to them.

As I have said many times over, this series is on a completely different level than anything I have read before. It surpasses Outlander and Harry Potter by miles. This book is rich, complex, and engrossing. I cannot tell you how many countless hours I’ve spent just reading theories, researching family histories, reading lore, and staring at maps for these books. This series is all encompassing and I truly love being fully submerged in the world of Westeros. I don’t even care that the books are long and the writing sometimes overly descriptive. It’s so mind-blowing and every time I pick up one of Martin’s books I know that I am in for a treat. I have literally been inside the mind of a genius.

Take Two Review Book Edition: A Storm of Swords (A Song of Ice and Fire #3) by George R.R. Martin

When you know what a man wants you know who he is, and how to move him.

Courtesy is a lady’s armor.

One voice may speak you false but in many there is always truth to be found.

Every man must die, Jon Snow. But first he must live.

One thought on “Take Two Review: A Storm of Swords (A Song of Ice and Fire #3) by George R.R. Martin”

Leave a Reply to Hear Me Roar Cancel reply