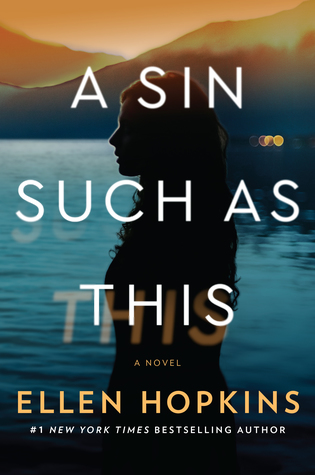 I’ve been curious about Ellen Hopkins for quite some time. Her books are always being checked out at my local high school library and I’ve seen a ton of students walking around with Crank in their backpack.

Many of her books are YA novels so I was curious to see what it is that so many teens love about her work. From the sound of it, she writes really really edgy stuff so needless to say I was intrigued. Reading for high school students is like pulling teeth so when they are eagerly awaiting the next Ellen Hopkins book in droves, clearly there is something interesting happening there.

When A Sin Such As This came across my desk for review, I jumped on it even though it was geared toward adults and it was the second in a series, I was curious to see what it was about her writing that made so many students want to read her books—is it content? Prose? What is it about this author that people love?

In this gripping follow-up to Love Lies Beneath, #1 New York Times bestselling author Ellen Hopkins’s “fabulous, sex-filled masterpiece of mystery and romance” (Library Journal, starred review), the honeymoon ends for Tara Lattimore when her husband’s ex-girlfriend is murdered, and she becomes a prime suspect.

Tara thought she was finally settling down when she married charming, handsome Dr. Cavin Lattimore, but life seems to be only getting more complicated. During the honeymoon, Tara’s niece Kayla moved into their Lake Tahoe home and quickly hooked up with Cavin’s manipulative, seductive son Eli. In a matter of weeks, Tara has gone from rich, single San Francisco professional to suburban housewife managing her niece’s emotional ups-and-downs, as well as her stepson’s continuing overt advances.

Adding to the family drama, Tara’s younger sister Melody is going through a serious marital breakdown. During a heated argument, her husband Graham insists he and Tara once had an affair. Despite Tara’s vehement denials, Melody is desperate to find the truth.

Enter Cavin’s gorgeous ex-girlfriend, Sophia, whose sudden relocation to Lake Tahoe is causing further shake-up. When Sophia is found murdered, police quickly narrow the list of suspects to Tara, Cavin, Eli, and Kayla. All four have motive. All four have lost themselves in a complicated web of lust, jealousy, and betrayal. But how far was one of them actually willing to go? Tara has always considered herself a tough, self-made woman, on her own since she was a teen after a childhood defined by poverty, abuse, and neglect. For years, she suffered the sins of others. But that doesn’t mean she never committed her own. Are the sins of the past about to catch up with her? (summary from Goodreads).

So I may or may not have missed the ‘sex-filled masterpiece’ recommendation clearly stated at the beginning of the summary and pitch I received. I simply saw the name ‘Ellen Hopkins’ and was eager to read something by her—YA or adult—so I quickly agreed and made room on my review schedule for this one.

Imagine my surprise when there was indeed a lot of sex. I was like wait what’s going on here, why is there so much sex in a YA book?! I realized fairly quickly that this was clearly NOT a YA book—but something meant for adult audiences only. So be warned people there is quite a bit of sex and graphic content in this book.

This book is the second in a series and I would say readers would enjoy this book more if they read the first book. I went in blind and I didn’t feel like I had as strong of a connection with Tara as other readers had from the previous book from the sound of things. Though not entirely necessary I supposed because Hopkins does fill new readers in, but for me I just felt disconnected from her as a character as I didn’t have that connection from the first book. So if you ask me—read the first book before this one.

While there is a lot of sex in this book—it didn’t entirely put me off. I liked reading about all the complicated relationships and the different perspectives that some of the characters had when it came to sex, love, and relationships. This book explored a whole lot of different angles and topics which keep things moving and interesting.

I think this book will appeal to readers in their 20’s-30’s. I don’t know that I would want to read this book with my mom, but I did enjoy it—sex and crazy family and all. I personally think this book is geared toward a younger generation.

There is a lot of family drama and mental health issues addressed in this book which I found to be an interesting combination. I love that Hopkins is bold and puts sensitive issue front and center in her books.

I rated this book a 3 because I felt a little disconnected with the overall story having not read the other book first. I hate to have my literary shortcomings be the reason it was rated lower but I can’t help how I felt. I didn’t feel as invested in the story without knowing Tara on a deeper level. I mean I liked the book but I just didn’t love it in the way that I had hoped.

Book: A Sin Such As This (Love Lies Beneath #2) by Ellen Hopkins

Tuesday, May 29th: The Lit Bitch

Wednesday, May 30th: From the TBR Pile

Thursday, June 7th: Thoughts on This ‘n That

One thought on “Review: A Sin Such As This (Love Lies Beneath #2) by Ellen Hopkins”