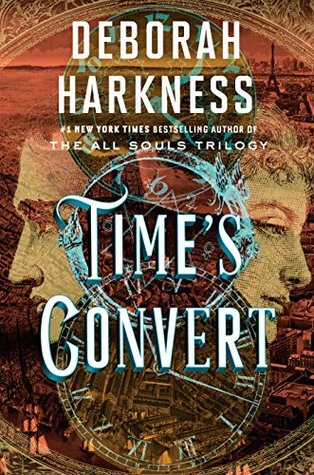 I first saw A Discovery of Witches in my local bookstore when it first came out. I bought the book and then kind of forgot about it. Like a ghost, the book haunted me from my bookshelf.

Eventually I picked it up to read and absolutely fell in love with the characters, story, and world that Harkness created. I breezed through all of the books and enjoyed each one for various reasons. I was genuinely sad when the series came to an end.

Then I heard that Harkness was coming out with a new book that was set in the same world as the All Soul’s Trilogy complete with old friends from the previous books!

On the battlefields of the American Revolution, Matthew de Clermont meets Marcus MacNeil, a young surgeon from Massachusetts, during a moment of political awakening when it seems that the world is on the brink of a brighter future. When Matthew offers him a chance at immortality and a new life free from the restraints of his puritanical upbringing, Marcus seizes the opportunity to become a vampire. But his transformation is not an easy one and the ancient traditions and responsibilities of the de Clermont family clash with Marcus’s deeply held beliefs in liberty, equality, and brotherhood.

Fast-forward to contemporary Paris, where Phoebe Taylor—the young employee at Sotheby’s whom Marcus has fallen for—is about to embark on her own journey to immortality. Though the modernized version of the process at first seems uncomplicated, the couple discovers that the challenges facing a human who wishes to be a vampire are no less formidable than they were in the eighteenth century. The shadows that Marcus believed he’d escaped centuries ago may return to haunt them both—forever.

A passionate love story and a fascinating exploration of the power of tradition and the possibilities not just for change but for revolution, Time’s Convert channels the supernatural world-building and slow-burning romance that made the All Souls Trilogy instant bestsellers to illuminate a new and vital moment in history, and a love affair that will bridge centuries (summary from Goodreads).

So I had high expectations for this book. The All Soul’s series is one of my absolute favorites and I would hate if this book didn’t live up to the hype. Fortunately, I thought this was an ok follow up to a beloved series. While it lacked some of the mystery and tension that the All Soul’s trilogy possessed, it was still nice to revisit familiar characters and see their story play out.

I liked the alternating POVs, though I could have done without some of the flash back scenes, but over all I thought that that helped move the story on and keep readers interested in both of the characters.

Following up to such a tremendously popular series can be hard. Do you do something completely different that readers wouldn’t expect (JK Rowling I’m looking at you) or do you stick with what your readers are familiar with and do spin offs with new characters set in the same world (Diana Gabaldon and the Lord John series for example). It’s such a fine line and hard to decide. I personally like the new characters/same world option which is what attracted me to this book in the first place.

Harkness has already developed a strong world and memorable characters, that it makes sense for her to branch out and write other books on beloved characters. But for me this one just didn’t have the same magic as the All Soul’s series. It wasn’t bad by any means, it just didn’t have the same chemistry that the other series had. It’s almost impossible to not factor in the previous series when it comes to reviewing this book. If you haven’t read the All Soul’s series and are trying to decide if you should read the series first or this standalone…..I say read the standalone because on it’s own, it’s an excellent read but when compared to the series it lands closer to good.