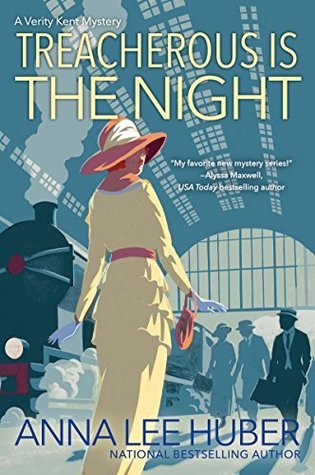 Full disclosure, I’ve been a huge fan of Anna Lee Huber for years. I absolutely love all of her books and I can’t get enough of the heroines, mysteries, and of course the covers! The Verity Kent series is no different.

I read the first book in the Verity Kent series earlier this year and I loved it! It was an interesting start to a different type of heroine for Huber. I was eager to see what else was in store for Verity in this latest book in the series.

In 1919 England, in the shadow of The Great War, many look to the spirit world for answers. But it will take an all too earthbound intrigue to draw in the discerning heroine of Anna Lee Huber’s latest mystery.

It’s not that Verity Kent doesn’t sympathize with those eager to make contact with lost loved ones. After all, she once believed herself a war widow. But now that she’s discovered Sidney is very much alive, Verity is having enough trouble connecting with her estranged husband, never mind the dead.

Still, at a friend’s behest, Verity attends a seance, where she encounters the man who still looms between her and Sidney–and a medium who channels a woman Verity once worked with in the Secret Service. Refusing to believe her former fellow spy is dead, Verity is determined to uncover the source of the spiritualist’s top secret revelation.

Then the medium is murdered–and Verity’s investigation is suddenly thwarted. Even Secret Service agents she once trusted turn their backs on her. Undaunted, Verity heads to war-torn Belgium, with Sidney by her side. But as they draw ever closer to the danger, Verity wonders if she’s about to learn the true meaning of till death do us part (summary from Goodreads).

While I might have enjoyed Verity Kent the first time around, the second time around made me love her. In this book we really dive into the complex emotions that many of the characters had about post war life. For instance, in the first book I was not a fan of Sidney.

I didn’t feel like I could trust him and I just felt that he was wrong for Verity. But as we get into the deeper nuances of their marriage and their post war life in this book, it becomes clear what Sidney’s intentions are. Personally I want to now know more about his life in hiding after the war and his war work. I hope that the next book is a little more about Sidney.

What I absolutely loved about this book was exploring post war life. I think in a lot of books there is so much focus on the Great War and it’s effects on people but then the peace treaties were signed and boom it was over. I loved that this book went into the whole fall out from the peace treaties. I especially loved touring the Flemish countryside in this book. It’s easy to forget that it took decades for these small village to rebuild and flourish again after the devastation and I thought the author did a marvelous job depicting that.

The whole time I was reading this book all I could think about was how I wanted to go and tour some of the old battlefields for my next vacation. She did such a marvelous job with her descriptions that I was dying to know more…..and I love the Great War history so I am partial to this time period but Huber’s writing made me love it so much more.

The mystery in this one was a little more like solving a riddle and following bread crumbs rather than an a traditional murder mystery as the previous book in this series. I loved this approach. It made me be more of an active reader and think about possible connections or motives. This was a smart and well written mystery.

This one would probably read ok as a stand alone mystery however why cheat yourself? Read the first one as well…..Verity is fun, mature, sassy, smart, and a different character than those of Huber’s other books. I highly recommend Verity Kent as well as all of Huber’s other works!

One thought on “Review: Treacherous Is the Night (Verity Kent #2) by Anna Lee Huber”