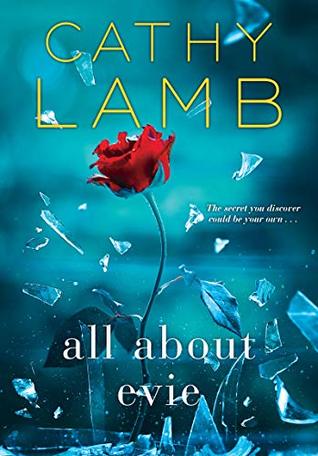 I have only read one of Cathy Lamb’s novels but as soon as I finished, I knew this was an author that I wanted to read more of!

Not only is she a local author for me (she’s from Oregon!) but she’s innovative with a strong voice and writing skills. Reading one of her books was a delight and when I saw this one was coming up, I was looking forward to it for months!

Besides the author’s name and appeal to me, I was instantly attracted to the story as well—mostly because it’s set on the San Juan Islands. If you have never been to the San Juan Islands, then you are missing out—they are so enchanting and beautiful so when I saw this book was set there—to a place I have visited quite a bit before—I couldn’t pass up the chance to read it!

As a child, Evie Lindsay was unnerved by her premonitions. As an adult, they have become a simple fact of life—sometimes disruptive but also inescapable, much like her quirky, loveable family.  Evie’s mother, Poppy, and her aunts, Camellia and Iris, are well known on San Orcanita island for their free-spirited ways and elaborately decorated hats. Their floral shop and Evie’s bookstore draw streams of visitors all summer long. This season promises to be extra busy: Evie’s sister, Jules, is getting married on the island.

As Jules plans her unconventional wedding, she arranges to do a DNA test with her mother, sister, and aunts, to see how much accepted lore about their heritage holds true. The results blow apart everything Evie has grown up believing about herself and her family. Spurred on by the revelations, Evie uncovers the real story of her past. But beyond her feelings of shock and betrayal, there are unexpected opportunities—to come to terms with a gift that has sometimes felt like a curse, to understand the secrets that surrounded her childhood, and to embrace the surprising new life that is waiting for her (summary from Goodreads)

This book was a little quirky but so fun to read. Evie has premonitions and while this book isn’t necessarily ‘paranormal’ or ‘magical realism’, there is a hint of magic in the title character. I loved all of her animals and wacky relatives. It made Evie so real, like she was someone I could have met at a coffee shop and been friends with and we could share weird stories about our pets and family. She was well developed and unique.

The setting of this book doesn’t disappoint either. As I mentioned the San Juan Islands are so so so beautiful and I think Lamb captured their mystique and beauty in this book. I have sailed through these islands before and reading her descriptions of them was like being there all over again. Well done!

There was a lot of range in this book—some humor and some heartache but it’s seamless and even though I felt a range of emotions, I felt as though the story was balanced and didn’t swing too far one way or the other. It was well written, interesting, and unique. I have only read one of Lamb’s other books but I felt that this one was truly a star all by itself. It was much different than the other book I have read by her but no less exciting and memorable.

The only thing that I felt a little disappointed with was the DNA. It was highlighted in the summary quite a bit but then when it was revealed, it seemed like a blip on the radar in the grand scheme of the story. But other than that, I felt as though this was a fun, worthwhile read that you don’t want to miss. It’s quirky and different, don’t miss this one!

Kindle Edition, 480 pages
Expected publication: October 29th 2019 by Kensington
ASIN B07NCPSX2X
Free review copy provided by publisher, Kensington in partnership with Tall Poppy Writers/Blogger, in exchange for an honest review. All opinions are my own and in no way influenced.
Rating: 4.5 stars
Genre: womens fiction