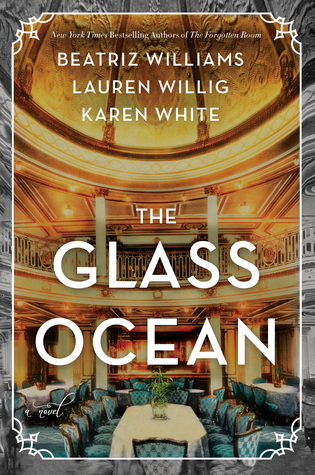 To say that the three “W” writers are some of my favorites is an understatement. I love all three of these authors and for different reasons. They each tell such a fantastic story and I love that they collaborated on this book together!

I knew they all co-wrote another book, The Forgotten Room, but I haven’t yet read that one. When this one came out, I ordered the ebook but they as usual, it got buried in my endless TBR list.

Then, I discovered audiobooks and was thrilled to see that this one came up as a suggestion based on my wish list. I knew that it was the right time to read this book, so I downloaded it and started listening.

May 2013
Her finances are in dire straits and bestselling author Sarah Blake is struggling to find a big idea for her next book. Desperate, she breaks the one promise she made to her Alzheimer’s-stricken mother and opens an old chest that belonged to her great-grandfather, who died when the RMS Lusitania was sunk by a German U-Boat in 1915. What she discovers there could change history. Sarah embarks on an ambitious journey to England to enlist the help of John Langford, a recently disgraced Member of Parliament whose family archives might contain the only key to the long-ago catastrophe. . . .

April 1915
Southern belle Caroline Telfair Hochstetter’s marriage is in crisis. Her formerly attentive industrialist husband, Gilbert, has become remote, pre-occupied with business . . . and something else that she can’t quite put a finger on. She’s hoping a trip to London in Lusitania’s lavish first-class accommodations will help them reconnect—but she can’t ignore the spark she feels for her old friend, Robert Langford, who turns out to be on the same voyage. Feeling restless and longing for a different existence, Caroline is determined to stop being a bystander, and take charge of her own life. . . .

Tessa Fairweather is traveling second-class on the Lusitania, returning home to Devon. Or at least, that’s her story. Tessa has never left the United States and her English accent is a hasty fake. She’s really Tennessee Schaff, the daughter of a roving con man, and she can steal and forge just about anything. But she’s had enough. Her partner has promised that if they can pull off this one last heist aboard the Lusitania, they’ll finally leave the game behind. Tess desperately wants to believe that, but Tess has the uneasy feeling there’s something about this job that isn’t as it seems. . . .

As the Lusitania steams toward its fate, three women work against time to unravel a plot that will change the course of their own lives . . . and history itself. (summary from Goodreads).

This book worked in so many ways. I loved each of the storylines and how they wove together throughout the story. I think my favorite was Sarah’s story though, then Caroline, and finally Tess. I adored Sarah and thought she was funny and quirky as only a historian can be (I my self am a historian so her story resonated with me quite a bit!). Caroline provided the glitz and glamour of the story and I found her maybe a little indecisive, naive, and maybe even a tad spoiled when it came to loving two men. But I thought it worked in the story. I loved seeing how she changed and how she found her strength.

Tess for me was the least interesting. I felt bad for her and all that she endured, especially the unrequited love she felt for Robert. But over all for me, I just couldn’t relate to her in the same way that I could relate to Sarah and Caroline. I liked her just fine and ultimately her story was satisfying in the end, but part of me hoped for a different ending even though the selected ending fit so much better—it was really the only way things could have gone.

Sure this book was a little Titanic-esque but I loved it and I thought it worked so well. I loved this historical elements and the possible conspiracy and how Sarah and John worked to uncover the historical secrets of the Lusitania. It was so well done and entertaining. I found myself looking for any excuse to leave my house and drive so I could keep listening to the story.

The narrators were great for the most part. Sometimes I thought they tried a little too hard with their voice imitations. For example when a man was speaking they would try and change their voices to sound deeper. At first it was a little distracting, but soon enough I was engrossed in the story and just wanted to know what happened next and therefore didn’t focus on the narrators beyond the words they were reading.

This was a lovely book and I am so sad that I wait this long to read it. Comparatively, I didn’t wait THAT long, but when I bought the book back in September, I had ever intention of reading it then and now that I read it, I wished I had enjoyed it sooner because it was wonderful!

The only thing I really want to know now…….who wrote what sections? My guess…..Willig wrote Sarah, White wrote Caroline, and Williams wrote Tess. Can anyone tell me if I am right? I have no idea!

Audible Audio, Unabridged
Published September 4th 2018 by HarperAudio
ASIN B07DVNX4L5
Audiobook copy provided by, personal collection from Audible, all opinions are my own and in no way influenced.
Rating: 5 stars
Genre: historical fiction