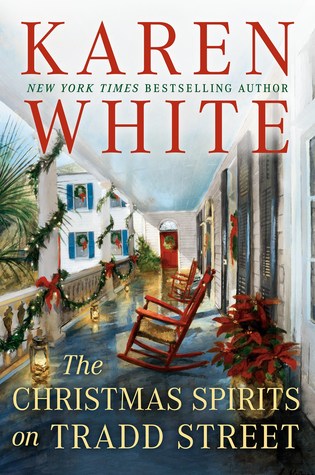 I really have no particular reason other than I just don’t think if it when I go on the hunt for a mystery. Well this book came up for review and the lovely cozy Christmas cover hooked me.

As always, I had some trepidations about picking this book up with is being number 6 in the series, but I simply couldn’t pass on this adorable cover and the perfect excuse to pick up this series once and for all!

Melanie Trenholm should be anticipating Christmas with nothing but joy–after all, it’s only the second Christmas she and her husband, Jack, will celebrate with their twin babies. But the ongoing excavation of the centuries-old cistern in the garden of her historic Tradd Street home has been a huge millstone, both financially and aesthetically. Local students are thrilled by the possibility of unearthing more Colonial-era artifacts at the cistern, but Melanie is concerned by the ghosts connected to the cistern that have suddenly invaded her life and her house–and at least one of them is definitely not filled with holiday cheer….

And these relics aren’t the only precious artifacts for which people are searching. A past adversary is convinced that there is a long-lost Revolutionary War treasure buried somewhere on the property that Melanie inherited–untold riches rumored to be brought over from France by the Marquis de Lafayette himself and intended to help the Colonial war effort. It’s a treasure literally fit for a king, and there have been whispers throughout history that many have already killed–and died–for it. And now someone will stop at nothing to possess it–even if it means destroying everything Melanie and Jack hold dear (summary from Goodreads)

While this book can be read as a standalone, I could tell there were some side plots that were well established and had I started the series from the beginning, then I would have probably appreciated the side plots more. I thought Melanie was always rather busy, it seemed like there was always a lot of activity around her which causes a strain on her marriage etc. I thought Melanie was a great depiction of the modern mother being pulled in a million directions and I think a lot of readers will connect with her over this aspect of the story.

The characters were well realized and formed and I could tell there was a lot of back story readers could glean from the other books in the series. While I am a new reader, it wasn’t distracting but rather made me want to read the other books and find out what all I had missed along the way.

Where this book shines though is the mystery and history! I am not a huge fan of Revolutionary history but White had a daft hand with this history and sprinkled the right amount of detail in and I loved it! I enjoyed all the little spooky parts of the mystery and how it was all resolved. The mystery held my interest all the way through until the end and I felt satisfied with that arc of the story being resolved.

What I struggled with a bit though was the unresolved arc of Melanie and Jack. The way the book ended was too much of a cliff hanger for me. I wanted to see things just a little more resolved going into the next book, but I can also understand that in a series, cliff hangers are common place and often expected but I was hoping for a little more closure before this one ended.

That said, I loved the holiday feel of this book. It had a little holiday cheer but enough spookiness that made the transition from Halloween reading to Christmas reading feel less jarring!

One thought on “Review: The Christmas Spirits on Tradd Street (Tradd Street #6) by Karen White”