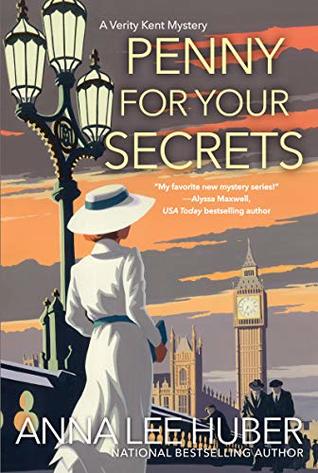 As many of you know, I have been a long time fan of Anna Lee Huber’s novels. She’s an exceptional writer and one that is perpetually on auto-buy for me!

Her latest series, Verity Kent, has been no exception. It’s an interesting time period—set immediately following WWI—and both the heroine and her husband are different characters than she’s written before which I find exciting.

This book is the third book in this series, and I would recommend reading the series beginning to end, however, it’s is not necessary to remain orientated in the story. As with many of Huber’s novels, the focus is the mystery rather than the character’s side plots etc. It’s just so good I would hate for people to miss out on this one, beginning to end.

The Great War may be over, but for many, there are still obstacles on the home front. Reconciling with her estranged husband makes Verity sympathetic to her friend Ada’s marital difficulties. Bourgeois-bred Ada, recently married to the Marquess of Rockham, is overwhelmed trying to navigate the ways of the aristocracy. And when Lord Rockham is discovered shot through the heart with a bullet from Ada’s revolver, Verity fears her friend has made a fatal blunder.

While striving to prove Ada’s innocence, Verity is called upon for another favor. The sister of a former Secret Service colleague has been killed in what authorities believe was a home invasion gone wrong. The victim’s war work—censoring letters sent by soldiers from the front—exposed her to sensitive, disturbing material. Verity begins to suspect these two unlikely cases may be linked. But as the connections deepen, the consequences—not just for Verity, but for Britain—grow more menacing than she could have imagined (summary from Goodreads)

As always, Huber doesn’t disappoint. I was hooked on this mystery from the beginning and like Verity, I was baffled and unsure of what direction things were going in and why. I also liked that this book seemed to set up an arch nemesis for Verity and her husband. I think in a lot of historical mysteries there is a push to keep things contained and ‘solved’ in one or two books but with this book, I like the bold direction Huber is taking.

There is clearly an arch nemesis in being created here and a huge and complicated larger crime happening that can’t be wrapped up in this book, the implications of the crime/crimes in this book are too great. This aspect easily as a couple of books to work itself out. It has far reaching consequences and I couldn’t be more excited for what the future holds.

Verity is such a raw and real character for me. While I love all of Huber’s other heroines etc, there is something so much more real about Verity. I don’t know if it’s the time period or just who Verity is, but she’s strong and yet flawed. She’s fighting her own demons throughout the series—much like the men returning from war and it’s a great representation.

The only thing that has been a bit of a bummer for me in this series is that I don’t like Sidney. There’s something about him that I just don’t trust and don’t find dashing or romantic. I can’t quite put my finger on it but I’m just not a Sidney fan. He’s so secretive and the way he wrongs Verity in the first book by keeping things from her has basically upset me throughout the series and I don’t trust him. I prefer Max personally. I keep hoping that him and Verity will end up together but it’s looking unlikely at this point. While I might not love Sidney, it’s purely a personal preference and in no way reflective of the story.

Overall this is a fantastic series and another win for Huber! If you love historical mysteries, then you don’t want to miss this book but do yourself a favor and read the entire series! Verity is a pistol and you will love her!

Paperback, 336 pages
Expected publication: October 29th 2019 by Kensington
ISBN 1496713192 (ISBN13: 9781496713193)
Free review copy provided by publisher, Kensington, in exchange for an honest review. All opinions are my own and in no way influenced.
Rating: 4 stars
Genre: historical fiction, mystery