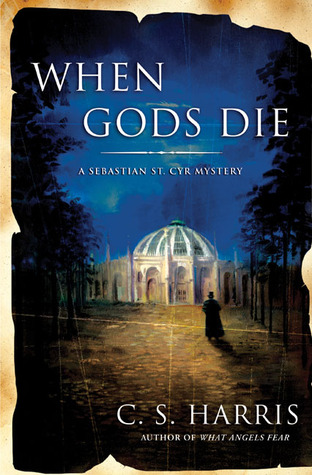 I was approached a few years ago to read the Sebastian St Cyr series and at that time it was on book 12! I decided to give it a go, but I wanted to read the first book before I started book 12—so I did.

I read the first book and I thought it was really good but I didn’t have a desire to go back and read the series from beginning to end so that I could read book 12. So  read book 1 and then started book 12. Since then I have read books 12-14 with book 15 coming out later this spring.

As I was approaching the end of the year, I wanted to read something quick and fun, I happened to see this second book was on sale, so I picked it up randomly just to pass some time.

Brighton, England, 1811. The beautiful wife of an aging Marquis is found dead in the arms of the Prince Regent. Draped around her neck lies an ancient necklace with mythic origins–and mysterious ties to Sebastian St. Cyr, Viscount Devlin. Haunted by his past, Sebastian investigates both the Marchioness’s death and his own possible connection to it–and discovers a complex pattern of lies and subterfuge. With the aid of his lover, Kat Boleyn, and a former street urchin now under his protection, Sebastian edges closer to the killer. And when one murder follows another, he confronts a conspiracy that threatens his own identity…and imperils the monarchy itself. (summary from Goodreads).

Honestly this book was simply meant to fill a gap in my reading, I had no intention of enjoying it as much as I did. I couldn’t believe how good this one was. That’s not to say that the series itself isn’t good. It is a great series but book one was mostly a book to establish a series and I went from book one to book 12 and by that point it was clear that so much had happened and the relationships between the characters were nuanced and complex, but I didn’t feel lost necessarily as I read the other books at the end of the series, I simply just didn’t feel as invested in the larger story linking the series together if that makes sense.

Now that I have read a few more books in the early part of the series, the relationships and histories of the later books take on an entirely new perspective for me which I am loving. These books are fast reads and seem to get better and better as I make my way through the earlier books in the series. The first book was good (4 stars from me) but the second book showed Sebastian really taking shape as a character and detective. I loved it!

This series is just what I needed right now. The authors describes her series as Mr Darcy meets James Bond and I would completely agree! Like the newer, grittier James Bond. It’s a fantastic series with lots of twists and turns that kept me guessing and devouring each page. The chapters are quick and to the point which kept propelling me forward. I also love how incredibly authentic the author is. There is considerable historical details, down to the slang of the period that just makes this series extra special.

As you might have guessed, I put the next 5 books on hold at my library and I am currently half way through the 4th book in the series in just as many days. I am so happy I decided to pick this one up on a whim, even if it had derailed all of my other reading—-it’s completely worth it and I can’t wait to see what Sebastian gets up to in the coming books as well as see how the character relationships evolve and shift.