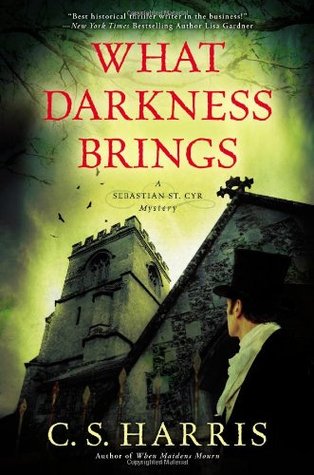 I am just about caught up with this series now. I started the series with book 12 and have read through to book 14, but then I decided to go back and read the series from start to finish.

I have just about achieved my goal, but I no doubt will go back and do a take two review on the books I read out of sequence so that I have a better grasp of all the events from beginning to end.

This mystery was excellent. I loved having a victim that I loathed and I thought the author did a fantastic job at justifying the pursuit of justice that Sebastian sought.

London, September 1812. After a long night spent dealing with the tragic death of a former military comrade, a heart-sick Sebastian learns of a new calamity: Russell Yates, the dashing, one-time privateer who married Sebastian’s former lover Kat Boleyn a year ago, has been found standing over the corpse of notorious London diamond merchant Benjamin Eisler.

Yates insists he is innocent, but he will surely hang unless Sebastian can unmask the real killer. For the sake of Kat, the woman he once loved and lost, Sebastian plunges into a treacherous circle of intrigue. Although Eisler’s clients included the Prince Regent and the Emperor Napoleon, he was a despicable man with many enemies and a number of dangerous, well-kept secrets—including a passion for arcane texts and black magic.

Central to the case is a magnificent blue diamond, believed to have once formed part of the French crown jewels, which disappeared on the night of Eisler’s death. As Sebastian traces the diamond’s ownership, he uncovers links that implicate an eccentric, powerful financier named Hope and stretch back into the darkest days of the French Revolution. When the killer grows ever more desperate and vicious, Sebastian finds his new marriage to Hero tested by the shadows of his first love, especially when he begins to suspect that Kat is keeping secrets of her own. And as matters rise to a crisis, Sebastian must face a bitter truth–that he has been less than open with the fearless woman who is now his wife. (summary from Goodreads).

This book brings in a few of the reoccurring characters into the fold. Yates has played a large role in previous books as has Sebastian’s former lover, Kat. So if you are thinking about starting this series with this book, think again and pick another. This book has a lot of past relationships and plots mixed together and while the author does a great job of explaining everything for new readers, I personally feel that new readers should go back and read some of the other books or pick a different book to start with.

As I mentioned before, this murder victim was vile and it made it really hard fro the reader to feel a sense of justice being sought for him—-but yet, Harris does it. She explained why it was so important for the real murderer to be found, especially from Sebastian’s perspective.

There is a lot going on in this one, a jewel heist, a murder, sexual exploitation, French spies…..while it sounds busy, it was absolutely not. I loved how the story turned out in the end and how the ends were tied up. The more Sebastian investigates murders, the more enemies he makes and more of a reputation. I really see that subtle change in the last couple of books. Sebastian has evolved so much in this series from the first book and it’s been a treat to read each and every book.

If you love historical mysteries that are well written with some grit, this is the series for you. I can’t stress how much I loved this mystery. The diamond angle was fun and I confess to spending hours down a rabbit hole researching the French Blue and it’s history. Fascinating to say the least!