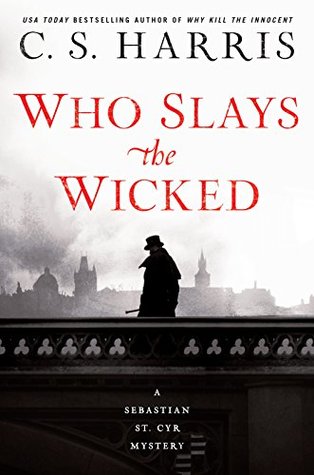 This is another series that I came into way late in the game. I read the first book in the series and then skipped a head to books 12 and 13. And of course now, here we are at book 14.

I love Sebastian, AKA Viscount Devlin, though so I couldn’t pass up this book when it came up for review. I will get into how jumping around in the series effected my reading experience later on in my review, but for now I want to talk a little bit about why this series appealed to me.

When I was pitched the 12th book, I hadn’t heard of this series before so I figured I better go back and read the first book before I even start the 12th book. I immediately fell in love with the Viscount Devlin and felt that this series was a little gritty compared to some of the other amateur detective novels I had read up until that point.

When the handsome but dissolute young gentleman Lord Ashworth is found brutally murdered, Sebastian St. Cyr, Viscount Devlin, is called in by Bow Street magistrate Sir Henry Lovejoy to help catch the killer. Just seven months before, Sebastian had suspected Ashworth of aiding one of his longtime friends and companions in the kidnapping and murder of a string of vulnerable street children. But Sebastian was never able to prove Ashworth’s complicity. Nor was he able to prevent his troubled, headstrong young niece Stephanie from entering into a disastrous marriage with the dangerous nobleman.

Stephanie has survived the difficult birth of twin sons. But Sebastian soon discovers that her marriage has quickly degenerated into a sham. Ashworth abandoned his pregnant bride at his father’s Park Street mansion and has continued living an essentially bachelor existence. And mounting evidence–ranging from a small bloody handprint to a woman’s silk stocking–suggests that Ashworth’s killer was a woman. Sebastian is tasked with unraveling the shocking nest of secrets surrounding Ashworth’s life to keep Stephanie from being punished for his death (summary from Goodreads).

As I said, I started this book series so late. Has that effected how I read the series….to some degree yes. When I read the 12th and 13th books after reading the first, I did feel like I had missed some major plot points and character evolution, but as far as the mystery itself goes—each book did read fine as a standalone. However, now that I have read the three books proceeding this one, I didn’t think I was as lost in some of the finer little details of the larger narrative.

So yes these books could be read as standalone books just like other big authors with established series, but if you want the total experience of seeing how Sebastian evolves and changes in the series and how his relationships with some of the characters has shifted, then obviously you should start much earlier in the series. In fact that is what I am doing, I am picking up some of the earlier books and giving them a go just because I love Sebastian and want to know more.

One of the things that I love about this series, is that it focuses more on the darker side of London. More of the back alley degenerates and criminal underworld rather than the toffs in Mayfair. I love that the author takes this approach, it makes for an engaging and unique perspective and it makes Sebastian stand out even more to me as a reader.

This particular book has a lot of layers to it. There is a lot of historic information and social history that is explored in this book, as well as an engaging mystery, mixed with some romance and progress in the larger narrative. I loved this installment, it was suspenseful and kept me engaged and reading until the wee hours. I can’t wait to continue the series and to go back and immerse myself in the larger series.

Kindle Edition, 352 pages
Expected publication: April 2nd 2019 by Berkley
ASIN B07FC1KCFT
Free book copy provided by publisher, Berkley, in exchange for an honest review. All opinions are my own and in no way influenced.
Rating: 4 stars
Genre: historical fiction, mystery