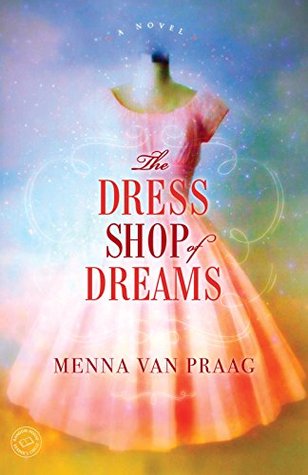 That would look beautiful on you. Why don’t you try it on?

How often do you hear that when you are shopping for the perfect dress?

Is it just fluff that the sales clerk is trying to make us believe or would it truly look beautiful on us? What if that statement was more like a promise?

Etta Sparks owns a dress shop where dreams actually do come true. A place where one dress could change your life.

Etta has the ability to make your dreams come true with the perfect dress and a little stitching to give you some courage.

Her granddaughter Cora has been grieving her parents death for years and Etta would like nothing better than for Cora to see what life has to offer her. For years Cora is determined to solve the mystery behind her parents’ deaths in a fire.

Being a scientist by nature Cora looks at things very analytically and is oblivious to the love struck Walt, the shy bookseller, who has loved her for years.

Etta hopes that Cora will find love and happiness with Walt so she makes a little stitch in Walt’s collar. That stitch should give Walt the courage to confess his feelings for Cora…..but as we all know, love is often not perfect…..even magical love.

At the heart of the novel are two very different concepts–dreams and reality….and can they actually exist together?

I discovered Van Praag last year when I read The House at the End of Hope Street. I was enchanted by her story telling and execution. It’s so soft and subtle and easy to read. I was captured by the plot from the beginning….I know that sounds cliche but I was. It was woven together with the perfect mixture of magic and reality.

It was also refreshing to have some mystery woven in throughout the novel as well. Often magical realism novels focus on the romance aspect of the genre but this had a little something for everyone. While I was reading all I could think of was this would be a perfect winter read…..mystery, romance, and just an overall cozy feel.

I liked this novel much better than The House at the End of Hope Street…..while I enjoyed HatEoHS, this book just captured the complexity of romance for me.

One of the things that took me by surprise was this novel featured four different romances. I was just expecting the one but having four well written romances was a treat. While this was an exciting surprise and at times enjoyable….this tactic had a little bit of a draw back for me.

The only thing that held me back from a five start rating was the many characters and story lines. While none of the romances were underdeveloped or boring, there was just a lot going on for me.

I had to concentrate on the characters and try to keep the different plots separate in my head so that was a bit of a distraction for me as a reader. I seem to recall thinking the same thing when I was reading HatEoHS.

While there were a couple of bumps in the novel, overall I would say that it was a truly enchanting tale! I love the cover, the characters, and the plot! It was a great way to kick off my new year reading! If you haven’t discovered Van Praag, this is the book to start with. It’s wonderful and illuminating!

Book: The Dress Shop of Dreams by Menna van Praag

2 thoughts on “Review: The Dress Shop of Dreams by Menna van Praag”