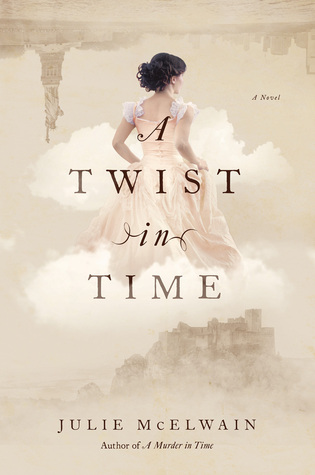 Long time readers of my blog know that I love time travel novels. I personally feel like I was born in the wrong era so I compensate by reading books on time travel and hope that I stumble upon my own vortex and end up in the castle of an insanely handsome duke to be, who just happens to be single and makes me a duchess and showers me with glittering jewels, titles, lands, oh and love of course!

Wow, I digress…I got wrapped up in that daydream a little too much I think haha!

In the spirit of my daydreaming, I picked up the latest Kendra Donovan novel which just so happens to have striking similarities to my daydreaming :).

When Kendra Donovan’s plan to return to the 21st century fails, leaving her stranded in 1815, the Duke of Aldridge believes he knows the reason—she must save his nephew, who has been accused of brutally murdering his ex-mistress.

Former FBI agent Kendra Donovan’s attempts to return to the twenty-first century have failed, leaving her stuck at Aldridge Castle in 1815. And her problems have just begun: in London, the Duke of Aldridge’s nephew Alec—Kendra’s confidante and lover—has come under suspicion for murdering his former mistress, Lady Dover, who was found viciously stabbed with a stiletto, her face carved up in a bizarre and brutal way.

Lady Dover had plenty of secrets, and her past wasn’t quite what she’d made it out to be. Nor is it entirely in the past—which becomes frighteningly clear when a crime lord emerges from London’s seamy underbelly to threaten Alec. Joining forces with Bow Street Runner Sam Kelly, Kendra must navigate the treacherous nineteenth century while she picks through the strands of Lady Dover’s life.

As the noose tightens around Alec’s neck, Kendra will do anything to save him, including following every twist and turn through London’s glittering ballrooms, where deception is the norm—and any attempt to uncover the truth will get someone killed (summary from Goodreads).

I have conflicting opinions about this book which makes it hard to review. On one hand, I didn’t care for the perpetual telling and pointing out of the similarities between the past and present, or constantly being reminded that though time had passed, some things never changed. I felt like I was constantly being told and reminded that Kendra didn’t belong in that century but yet things weren’t really THAT different when you looked at them with a different perspective. I figured that out on my own so having the writing point it out all the time got annoying fast. But like with the first book, I just tried to accept it and move on, but unlike in the first book, this time I found it more irksome.

Then I still didn’t feel any chemistry between Alec and Kendra. I am not really sure why, but I just don’t feel like their love/attraction is any great shakes. I felt like Kendra spent a lot of time saying how she didn’t feel comfortable in the time period and like she didn’t belong, but yet she loved Alec….??? The only thing that I felt like she loved was the job. She is clearly an independent minded, career woman and I felt like the author spent a lot of time creating that persona, and then trying to add Alec in just didn’t work for me. I hoped the romance would improve in this novel but it didn’t. It felt unnatural and just off. And the same goes for him….he was like I love her but I don’t know why….and frankly I don’t know why either. I never got the sense that they were passionate about each other in the way that they both describe independently, so the romance rang false for me. But like the constant telling of things, I just accepted their flimsy romance and moved on.

And while I know this will sound stupid and petty, I feel the need to just put it out there–the name Kendra does NOT work for me in any way–present or past. It’s too modern of a name for the Regency era and stands out like a sore thumb and as for the modern era, it sounds too juvenile for an FBI agent. For some reason it just grates on my nerves. I would have preferred something like Elizabeth or even Angela…something that could have worked in both periods or shortened in a nickname to suit both. I know this is a small criticism and it probably sounds petty but it just bothered me.

The meat of the novel was really in the mystery. McElwain shines when it comes to writing a complex mystery and steering the reader down possible roads and then quickly diverting them to something completely different. A different suspect, a different motive, just all kinds of different things which I found exciting and it always kept me on my toes. I love that many people had motive and means in this novel. There was a lot of speculation cast on the Weston family and frankly everyone had motive and I loved trying to figure out who had more motive and the temperament for the murder.

But I think my favorite aspect of the novel was the victim. In many of the Regency/Victorian era murder mysteries that I’ve read the victim and their lives are scarcely examined or looked at beyond them obviously being a victim of a crime. Rarely do the ‘detective’ look at the victim’s lives or dealings or even their personalities. Mostly the investigation centers around motive and potential suspects or clues rather than the victim. In this book, the victim is unlikable and vicious. I could almost understand why someone would kill her in a rage and I LOVED that about this book. Her personal life, lifestyle, and motives were a significant part of the mystery and because of that I felt more invested in the story and mystery itself.

So there you have it…..a split on this one. There were things that I loved and things that just didn’t work but I’ll be honest, my dislikes didn’t hamper my reading. I was invested in the story and read it quickly. I found myself reading at every opportunity, so to me that’s the mark of a great read. Not to mention I spent a lot of time thinking about the suspects individually and trying to figure out who had the best motive and how everything fit together. And I especially liked how the mystery was solved.

Initially I would have said three stars for this one, however, I still felt like there were enough things that I liked about it to justify a four star rating. So I decided to split the difference and go with a 3.5 star rating. It’s a good story and it has unique qualities that set it apart from other Regency era mysteries, the profiling of the suspect being one of them. I would still recommend this series to friends even if there were things I didn’t like…..there’s always room for improvement in everything isn’t there :).

Book: A Twist in Time (Kendra Donovan #2) by Julie McElwain